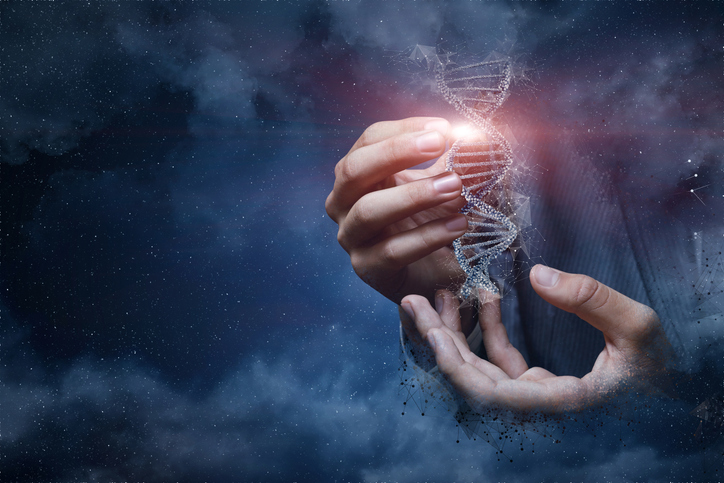 Hand shows a DNA molecule on the background of outer space.

What is Genome Editing?

Genome editing, which is also known as gene editing is a group of technologies which help scientists to alter the DNA of an organism. These techniques help the scientists to add, remove or alter genetic material at certain locations in the genome. At present there are many methods by which genome editing is done. Clustered regularly interspaced short palindromic repeats (CRISPR)-associated protein (Cas9) has become a revolutionary tool to edit the genome in a rapid, cheaper and accurate way in comparison to other existing genome editing methods. Novel applications of CRISPR/Cas9 helps in treating a broad range of diseases such as different types of cancer and neurodegenerative diseases. Thus, this novel CRISPR technology enhances the effectiveness of medication helping to improve personalised medicine.

This is the use of clustered regularly interspaced short palindromic repeats and this technique has been adapted by scientists after observing a naturally occurring genome editing system in bacteria. It was observed that the bacteria are able to capture snippets of DNA from invading viruses and this DNA was able to create DNA segments known as CRISPR arrays. These CRISPR arrays allowed the bacteria to “remember” the viruses which attacked it. Then on re-encountering the same viral attack, the bacteria would produce RNA segments from the CRISPR arrays which could target the DNA of the viruses. The bacteria would then use Cas9 or a similar enzyme to cut that portion of the DNA, which could ultimately disable the virus.

When the scientists researched this in the laboratory, it was seen that the CRISPR-Cas9 system works similarly. The scientists were able to create a piece of RNA along with a short ‘guide’ sequence which could bind to a specific target DNA sequence in the genome. This RNA could also bind to the Cas9 enzyme. Just like in bacteria, the modified RNA was able to recognize the DNA sequence. The Cas9 enzyme then cuts the DNA at the targeted location. Cas9 is the enzyme which is mostly used, but there could be other enzymes too which can be used. Once the DNA is cut, the researchers used the cell’s own DNA repair machinery to add or delete pieces of genetic material, or to alter the DNA by replacing an existing segment with a customized DNA sequence.

Targeted DNA alterations are initiated by the nuclease-induced double-stranded breaks (DSBs), which helps with efficient recombination of DNA in mammalian cells. The nuclease-induced DNA DSBs can be repaired either by homology-directed repair (HDR) or nonhomologous end-joining.

At present, most research on the genome is used to understand cells and animal models, but possibilities of its effectiveness and safety is been assessed in treating human diseases. Ethical consideration too are present as this technique alters the human genome. Currently, most of the changes introduced are limited to somatic cells where it is not passed to the next generation. If changes are made to the germline cells such as the egg or the sperm then the alterations can be passed to future generations. This is ethically challenging if the use of such a technology is permissible to enhance normal human traits like intelligence and height. Thus, germline gene editing is currently illegal in many countries.

Cancer therapy with genome editing: Cancer too maybe caused by the up-regulation and down-regulation of certain genes. The CRISPR/Cas9 helps in studying cancer by allowing to more accurately represent human models of various types of cancer. In leukaemia CRISPR/Cas9 can be used as a tracking device to determine the effect of IL (interleukin)4-induced signal transducer and activator of transcription (Stat)6 activation on the elimination of leukaemia cells.

Duchenne Muscular Dystrophy with genome editing: This is a muscular disorder which is caused due to a mutation in the DMD gene. This mutation causes a decrease in dystrophin levels which is responsible for muscular integrity. In vitro, CRISPR functions can be restored by the synthesis of dystrophin, using a gene knock-in. In vivo too, CRISPR/Cas9 has been shown to be effective in correcting the DMD gene in mice.

In addition, gene editing is useful in treating diseases such as AIDS, sickle cell anaemia, haemophilia and autism spectrum disorder.

Thus, to conclude, genome editing is showing promise in eliminating the challenges of various disease therapies by locating target genes. It has helped in enhancing drug efficiency. Thus, using a suitable vector with good penetration could carefully address the treatment of challenging diseases.

CRISPR has thus proved to be very effective with higher efficiency giving room for gene therapy to be successful in future.

The Relationship between Radiation and Mental Health