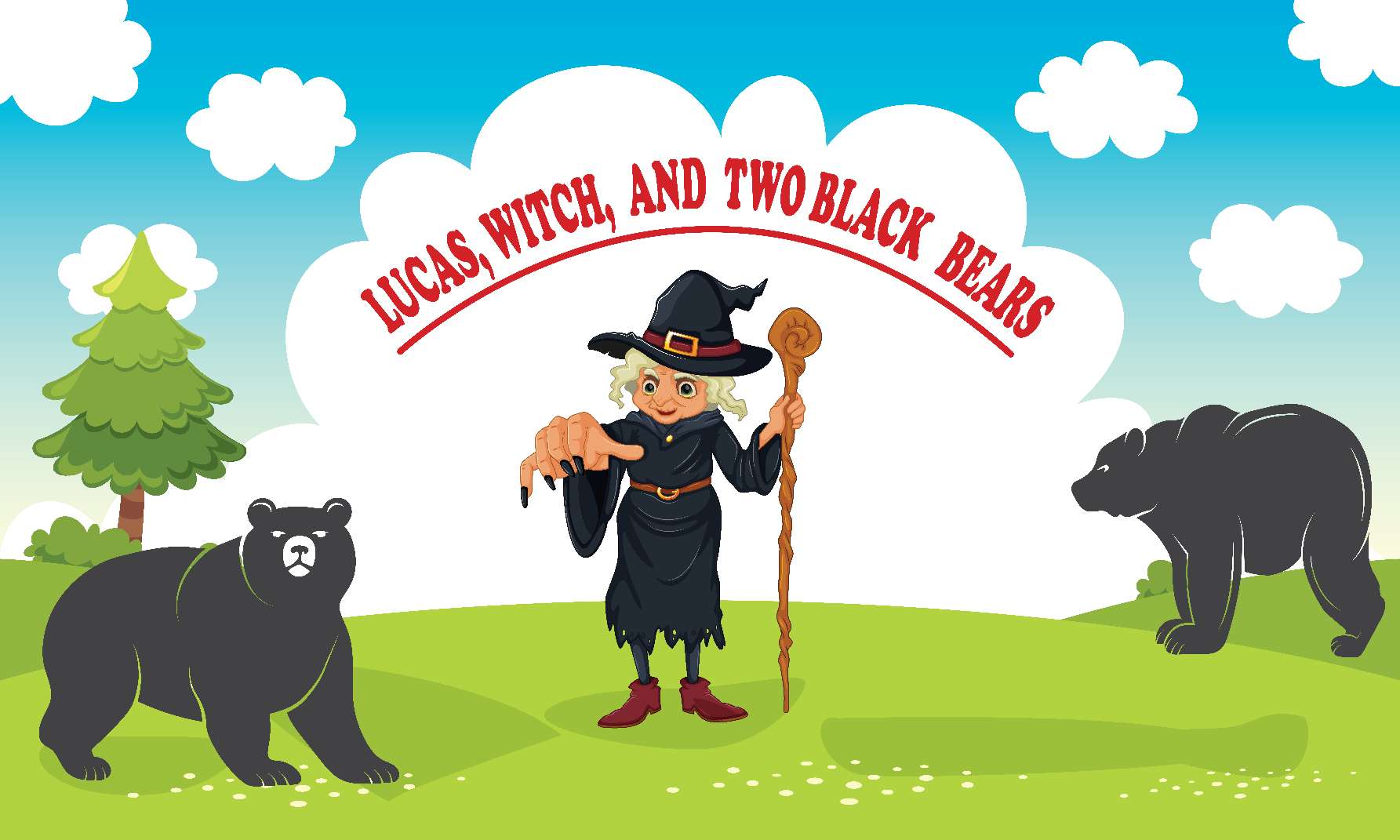 Lucas was a brave boy. One day, he wanted to pay his sister Maliya a courtesy visit, so he decided to take a shortcut through the nearby Shearwood forest.

It wasn’t long before Lucas got lost. To make matters worse, his stomach began to rumble for food.

“I need to get out of this forest”, he exclaimed.

Suddenly, he heard a crying sound coming from a not-so-far place in the forest.

Out of curiosity, he decided to follow the sound perhaps he might be able to get help and find his way out of the forest. Besides, he had nothing else to do.

Lucas reached a clearing in the forest. Alas! He saw a black baby Bear tied down to a big tree.

The baby bear looked up to Lucas to untie her. But Lucas was afraid.

While still thinking of what to do, suddenly, a Witch jumped into the space in front of the tied bear.

“What are you doing here boy?” asked the Witch.

“Emm…I was looking for my way out of the forest when I heard a distinct cry so I traced it down here.” Lucas explained.

“So, you want to untie the Bear?” said the Witch.

“Excuse me!” Lucas interrupted. “I want to go home. Please, help me find my way”

You are going nowhere! You are now my prisoner! The witch boasted.

Mother Bear has been looking for baby Bear. Immediately she appeared in the clearing, baby Bear shouted, “Mother!” “Mother!” Here I am, come and untie me!

What has the baby Bear done to you?” And that little boy? “Let them go!” Mother Bear commanded.

Looking confused, mother Bear asked the Witch, “Is there anything you want to trade for their freedom?”

After a little moment of contemplation, the Witch responded, “I like to be entertained. I’ll release anyone who can devour two big bowls of hot pap.”

“If that’s what you want, then I’m in. I can devour as many bowls as possible.” Said the mother Bear.

“There’s no need to brag,” the Witch said. “I’ll let you have baby Bear if you devour that big bowl of hot pap.”

“Not so fast,” said Lucas. ” I want to play your game too on the promise to release both of us and show me the route”.

“Give me a chance if you want to be fair”, replied Lucas.

“That’s okay,” said the Witch. “But you witnessed what happened to the mother bear. I’m sure you will collapse.”

Lucas took 1 bowl of hot pap. Unknowing to the Witch, Lucas began to brag about his prowess just to buy time for the pap to get cool. By the time he would consume the pap, it was moderately warm. He did the same thing the second time.

The Witch stamped her foot angrily. “You must have tricked me!” she said. “I don’t reward cheating!”

“I don’t think so!” said a voice. It was a woodcutter. He walked into the clearing, carrying his ax. “This little boy won fair and square. I saw the whole thing that had happened. Now release them, or I will chop off your broomstick into two.”

The Witch looked perplexed. She snatched up her broom and put it behind her. Then, she untied the baby Bear and then Lucas.

Lucas checked his body, and he was unharmed. He thanked the woodcutter, grabbed a bowl of hot pap, and hurried on to meet Maliya. It was starting to get dark.

When Lucas got to Maliya’s house, his sister welcomed him with a hug.

As Lucas narrated his day, he could see that Maliya did not believe him. So, he grabbed a napkin from his cross bag and unwrapped the already empty bowl.

Maliya almost fell off her chair.